Todo.txt More: Efficiently managing your todo list and your time

I tend to get fairly enthusiastic when it comes to lists, even more so when there's a chance to optimise my productivity. The end of the year is a time for looking backward and forward, so what better time to revise my time management solution that this?

Over the years, I've tried various ways of keeping todo lists. Some methods were more successful than others. Too often I found myself abandoning the lists I had because it introduced too much overhead (or I simply lacked the discipline to maintain them), or the lists themselves got too cluttered and I lost overview, or they were too detached from the places where I actually needed them.

Two things that did work well for me in recent years are the use of Github issues for software related tasks, and keeping track of todo tasks related to mails by tagging the mails (using notmuch. However, that is already two different systems, and they don't cover all possible todo tasks. Aside from Github I also use Sourcehut and Gitlab for software development, and at work they use Jira, so that would introduce even more systems to check. Such context switches, the need to check different systems, have an especially large negative impact on productivity. My aim is to minimize these.

What I want is one unified way to see and organise my todo tasks, regardless of where they come from. I also want to add tasks like simple household chores or hobby projects, with the main aim so I don't forget them. I want to be able to efficiently search through them so I can easy get all tasks pertaining to a specific project, a specific employer, a specific priority, etc..

I'm now coming back to todo.txt to do all this. This is a simple minimalistic solution, developed by Gina Trapani, that's already been around since 2006. It keeps todo tasks in a simple plain text file and introduces some basic syntax for tagging. A command line shell script called todo.txt-cli is provided for various basic operations. It requires no complicated database solutions, no complex software implementations, and it can just be used from your favourite text editor (vim in my case) even without any bells and whistles.

Priorities are adjusted as needed, corresponding to moving tasks between columns on a kanban board. I'm using three main contexts @work and @hobby and @chore to attempt to create a bit of a distinction between my work and private life.

There is already a wide variety of community software that handles todo.txt, but I was still missing some features, or they weren't implemented in other extensions in the way I prefer. So I took towards improving the todo.txt experience. I will describe what I added and how it can be used in the remainder of this post.

The todo.txt CLI implementation offers a nice way to extend it. I have done so and implemented various extensions which I felt were missing. I call this Todo.txt More. Go to its Sourcehut page to find the source code repository and installation instructions.

The following are usually not called directly:

One of the primary additions is a simple interactive interface powered by either fzf (terminal) or rofi (GUI). Both are fuzzy finders and allow to quickly navigate the todo tasks.

To display your tasks non-interactively, we recommend you use todo.sh more (short for todo.sh more list) rather than the traditional todo.sh list; todo.sh more redefines several built-in commands. A quick recommended way to use this from your shell is to set an alias t="todo.sh more", you can then do t list (or just t as a shortcut),t add,t done etc... All the regular commands as well as the extensions should be available.

Todo.txt-more will invoke the format and relsort extensions to do better colour highlighting and better relative sorting. You can pass any actions you also pass to todo.sh. Here is an example:

You can note the following in this example:

Between the more and lists actions, you can inject the format you want for the output and the colouring.

You might, however, prefer a more interactive view that allows you to do fuzzy search and makes the tasks directly actionable. If you run todo.sh fzf list @work, you'd the see same view as the static one, but interactively using fzf:

Or run todo.sh rofi list @work, for the same thing in rofi, which opens a graphical menu. This is great to tie to a keybinding in your (tiling?) window manager:

Note that your rofi may look different depending on the theme you are using.

The rofi method even binds some shortcuts keys for quick actions like prioritisation and editing. Moreover, you can directly add new entries with rofi by just typing the full task entry in the search field and pressing enter. For existing items, once you select an item in either rofi or fzf, you're presented with an action menu (todo.sh actionmenu) 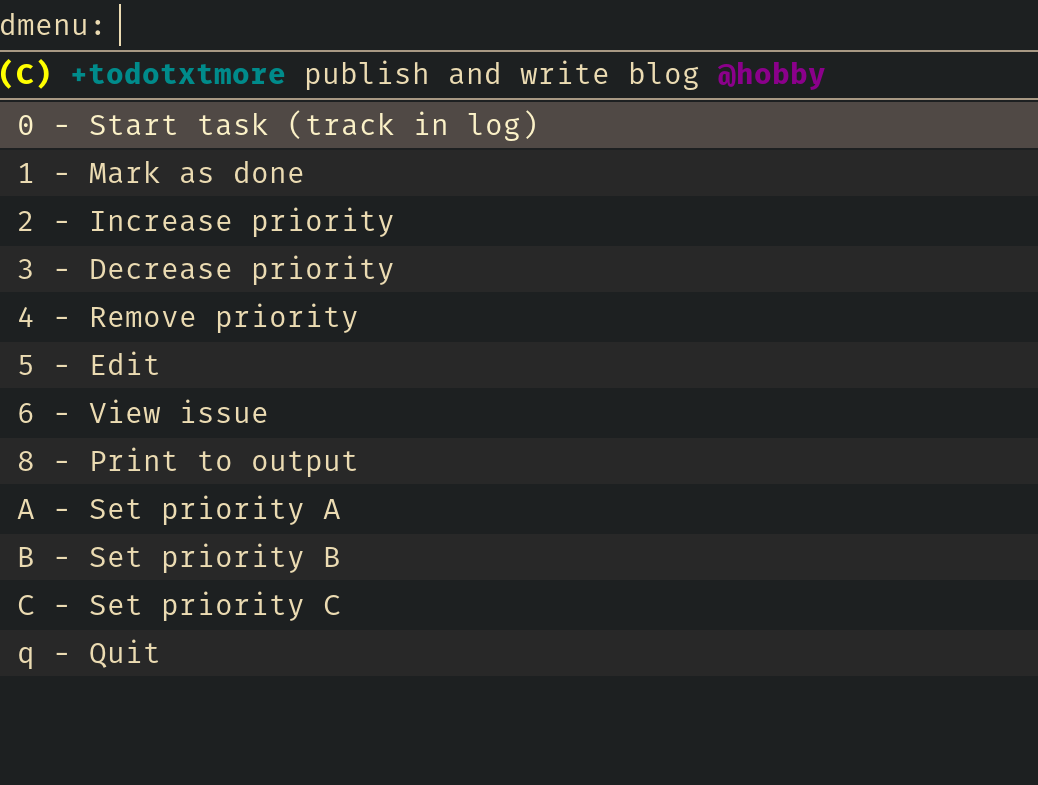 You can enable feedback via your notification daemon (via notify-send) by setting environment variable TODOTXT_NOTIFY=1. If set, you will get feedback notifications on various actions.

If you use Github extensively, like I do, its issue tracker is likely an important source of information for your todo tasks. However, it's cumbersome to have issues separate from your todo.txt and effectively have two systems you need to check. The issue extension should solve this problem. Its job is to sync issues (including pull requests) from github with your todo.txt. It will sync all issues assigned to you.

The sync works as follows:

These will all be appended to the end.

There are a few limitations to be aware of:

Though currently limited to Github, I hope to add Gitlab and Sourcehut support as well at a later stage.

Another common source of todo tasks is email. I often receive mails that require some kind of follow-up action, or that I simply have to reply to. I am using notmuch as a means to add tags to my mail and make it quickly searchable. I use a reply tag for mail I still have to reply to, and todo for mail that requires another follow-up actions. Of course, I want both in my todo.txt so I have everything in one place again.

The todo.txt notmuch extension syncs with your notmuch database. It runs a query (defined in environment variable $TODOTXT_NOTMUCH_SEARCH, which defaults to tag:todo or tag:reply fitting my own use-case) and adds all threads it finds to todo.txt. It is a one-way sync. Synced mails receive the context @mail and the notmuch tag translates to a hashtag. Any further mappings between notmuch tags and todo.txt can be configured in a JSON file, filename stored in $TODOTXT_NOTMUCH_MAP. Example:

Employers often require you to track your working hours, especially if you are working on a variety of distinct projects. Keeping track of this manually is a waste of time. If you have your todo.txt workflow in place, we can simply take advantage of this for tracking time as well. This is done using todo.txt timetrack and it can be invoked interactively via the action menu as presented by fzf or rofi. When you say start task a simply eentry of the full task line, prepended with the current date and time, is registered to a file timetrack.txt that lives alongside your todo.txt and done.txt. Only one task can be tracked at any given time (people suck at multitasking anyway, so better not pretend you can do it). When you start a new task the previous one ends. There is also todo.sh timetrack stop to stop tracking, which will simply register an idle entry in timetrack.txt. I recommend to automatically trigger this action when your screensaver/screenlock kicks in so you don't have to worry about it. The tracking will also be stopped automatically if you mark the currently tracked task as done via todo.sh more done or fzf/rofi.

To see the task you are currently working on, run todo.sh timetrack current. This may be worth adding to whatever bar (waybar/polybar/dwm's bar/etc) you use so you can see it at all times.

The timetrack.txt log can be visualised with todo.sh timetrack log, it optionally takes a start date and an end date (non-inclusive) as parameters (YYYY-MM-DD). Add the -d option if you want to have relative time (durations), use -s instead if you want it in raw seconds, these are also available for timetrack current as shown above.

Using todo.sh timetrack daysummary you can get a summary of total time spent, per day, on specific contexts or projects. It aggregates for each day all projects (+) and contexts (@) mentioned in the log.

Be aware that the contexts and projects used in aggregation are not mutually exclusive. You can use any combination you want.

Similarly, there is a weeksummary and monthsummary that aggregates per week/month. You may add the -all parameter to see individual tasks again (rather than just contexts and projects).

There is a fair degree of overlap between todo lists and calendars, even though they are distinct perspectives on your time planning. Todo.txt traditionally caters towards todo lists and not calendars, due dates are not in the initial design but can be easily using a due attribute, as many other implementations also do. Todo.txt-more follows this convention and takes due dates into account when sorting (relsort) and highlighting.

This opens up the road to expressing calendar items in todo.txt. The cal extension allows importing iCalendar (ics) format via todo.sh cal import.

The cal extension also has some specific visualisations via todo.sh cal list:

Add the --headers parameter for a more verbose view grouped per day.

The latter is also what you get if you just run todo.sh cal without further arguments.

If you want to contribute, git clone the source code repository and send patches to my public inbox. Read about the git e-mail workflow if you are not yet familiar with it.

The code is currently in a fairly early stage of development and needs further testing and cleanup.